To share your memory on the wall of Edith Johnson, sign in using one of the following options:

There may be a delay while processing. Please do not click the back button or refresh while a payment is processing.

Your donation has been processed successfully

Provide comfort for the family of Edith Johnson with a meaningful gesture of sympathy.

Print
Edith A. Johnson, age 99, of Watertown, formerly of Florence, SD, passed away on Saturday, January 19, 2019 at Jenkins Living Center.

Funeral services will be at 11:00 a.m. on Wednesday, January 23, 2019 with visitation for one hour prior to the service at the Wight & Comes Funeral Chapel in Watertown. Pastor Mindy Ehrke and Pastor Scott Dempster will officiate. There will be congregational singing accompanied by A. J. Sherrill.

Interment will be in the Goodhue Lutheran Cemetery, Florence, SD.

In lieu of flowers, memorials may be directed to Goodhue Cemetery Association.

Edith Angela Aaker Johnson was born on November 4, 1919 to Richard and Hilda (Frost) Aaker in Day County, South Dakota. She was baptized and confirmed in the Goodhue Lutheran Church near Florence. She grew up in Day County, South Dakota and attended Egeland #213 school district near the Waubay/Florence area. At the age of 13 she moved with her family to a farm north of Florence.

Edith married Julian "Stub" Johnson on November 28, 1940 and they farmed on the family farm for 50 years. Julian passed away on March 1, 1990 and Edith moved into Watertown. She lived at Cedar View Assisted Living for three years and then moved into Jenkins Living Center.

She belonged to the Golden Years Club in Florence and ladies aid at Goodhue Lutheran Church. In Watertown Edith was a member of Sons of Norway for a few years, and also Sr. Citizen's Center. Edith loved to play cards and enjoyed walks with friends, embroidery and crocheting. She had many nieces and nephews whom she enjoyed baby-sitting for.

Edith is survived by her sister-in-law, Marcene Aaker and several nieces and nephews.

She was preceded in death by her parents; her husband, Julian; five brothers, Thomas, William, Ralph, Rudolph in infancy, and Sidney; and two sisters, Alma and Henrietta.
Read Less

Receive notifications about information and event scheduling for Edith

By subscribing to updates, you will receive any notifications sent about changes to service schedules or other important information

Please add your text number or email address before submitting.

You have successfully been subscribed to notifications!

You will receive any future notification messages.

Provide comfort for the family with a meaningful gesture of sympathy.

We encourage you to share your most beloved memories of Edith here, so that the family and other loved ones can always see it. You can upload cherished photographs, or share your favorite stories, and can even comment on those shared by others.

Posted Jan 23, 2019 at 04:04am
To the Johnson family and friends please accept my deepest condolences for the loss of your loved one Edith. Very soon Jesus Christ will resurrect the loved ones we have lost in death back to life Acts 24:15; John 5:28, 29, right here on a brand new Paradise Earth no more sickness pain or death Life Without End Revelation 21:1-5 jw.org?
Comment Share
Share via:
HS

Flowers were purchased for the family of Edith Johnson. Send Flowers

Flowers were purchased for the family of Edith Johnson. Send Flowers 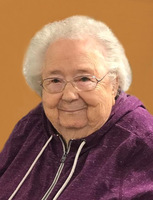